Mark Daly is the founding chief of the Analytic and Translational Genetics Unit (ATGU) at Massachusetts General Hospital. His research has historically focused on the development and application of statistical methods for the discovery and interpretation of genetic variation responsible for complex human disease. With the creation of the ATGU, he and other core faculty are focused on the interpretation of genome sequence and the use of genome information in clinical settings.

Daly is also an institute member and co-director of the Program in Medical and Population Genetics at the Broad Institute, where he leads many large-scale genome sequencing studies in autism and inflammatory bowel disease.

While developing computational and statistical methods that can be broadly applied, Daly’s group has several primary medical genetics research foci. Daly runs an extensive research program in neuropsychiatric genetics — particularly in autism, schizophrenia and ADHD — and has led large-scale genome-wide association study (GWAS) and exome sequencing efforts in this area. His lab serves as the analytic hub for the Psychiatric Genomics Consortium, an international consortium leading the largest collaborative GWAS studies in five major psychiatric disorders.

Daly also has a long-standing interest in the mapping of genes for Crohn’s disease and ulcerative colitis. He helped found and lead an international effort that has identified more than 150 genetic risk factors and, in collaboration with Ramnik Xavier’s group, pursues the functional interpretation and clinical ramifications of these continued gene discovery efforts.

Daly is also director of the Finnish Institute of Molecular Medicine in Helsinki and has co-authored more than 50 manuscripts with Finnish scientists studying the genetic origins of human disease.Daly received his B.S. in physics from the Massachusetts Institute of Technology and his Ph.D. in human genetics from Leiden University, Netherlands. 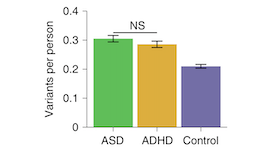 NewsAutism spectrum disorder and attention deficit hyperactivity disorder have a similar profile of rare mutationsFebruary 21, 2020
Subscribe to our newsletter and receive SFARI funding announcements and news
We use cookies to analyze web traffic and to improve your browsing experience; full details are in our privacy policy. Please agree to accept cookies from our site.AGREE