Michael Talkowski received his Ph.D. in human genetics and trained in genomics as a postdoctoral fellow at Harvard Medical School, Massachusetts General Hospital and the Broad Institute.

Talkowski’s research program has focused on understanding the genetic etiology of complex neurodevelopmental and neuropsychiatric disorders. His group integrates molecular and computational approaches to explore the functional consequences of genomic variation, with a particular interest in the relationship between genome structure and function.

He has co-led recent studies that sought to evaluate the complete genetic architecture of autism from whole-genome sequencing data and performed functional characterization of associated variation using genome-editing techniques and induced pluripotent stem cell models. His research into large chromosomal abnormalities and the mutational spectrum of structural variation in the human genome has resulted in the discovery of new classes of complex rearrangements that occur; such rearrangements often involve inversion-mediated alterations and include extreme examples of genome reorganization, such as chromothripsis.

Recent SFARI-funded research studies from Talkowski’s laboratory have led to numerous novel gene discoveries in autism, as well as findings that demonstrate the complexity associated with interpreting noncoding regulatory variation in autism. 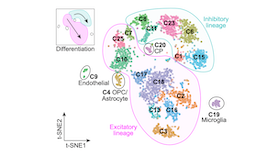 NewsASHG 2019: Presentations by SFARI Investigators and collaboratorsOctober 1, 2019
Subscribe to our newsletter and receive SFARI funding announcements and news
We use cookies to analyze web traffic and to improve your browsing experience; full details are in our privacy policy. Please agree to accept cookies from our site.AGREE