In 2002, Katsanis established his independent research lab at the Institute of Genetic Medicine, John Hopkins University, where he led studies that unified several allied conditions under the ciliopathy umbrella.

In 2009, he moved to Duke University to establish the Center for Human Disease Modeling (CHDM), of which he is the director, and leads the Duke Task Force for Neonatal Genomics. This multidisciplinary group of physicians and basic scientists strives to synthesize genomic and biological data for the faster diagnosis, improved/focused clinical care and potential therapeutic paradigms for infants and neonates with genetic conditions.

Katsanis is a professor in the departments of cell biology and pediatrics and holds the Jean and George Brumley Distinguished Professorship. He has published over 250 research papers, reviews and book chapters. He serves on several advisory, editorial and organizational boards and has delivered over 150 lectures in 20 countries. 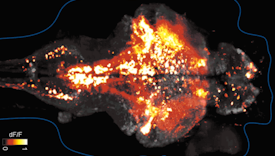 NewsSFARI workshop discusses zebrafish as experimental systems to study autismSeptember 11, 2018
Subscribe to our newsletter and receive SFARI funding announcements and news
We use cookies to analyze web traffic and to improve your browsing experience; full details are in our privacy policy. Please agree to accept cookies from our site.AGREE