Jason Lerch is the director of Preclinical Imaging at the Wellcome Centre for Integrative Neuroimaging (WIN) at the University of Oxford, an adjunct scientist at the Mouse Imaging Centre (MICe) of the Hospital for Sick Children and an associate professor in medical biophysics at the University of Toronto.

Lerch joined WIN in March of 2019; prior to that, he completed his Ph.D. in 2005 in the Department of Neurology and Neurosurgery at McGill University and a postdoctoral fellowship at MICe from 2005 to 2008 with Mark Henkelman and John Sled. He received his B.A. in 1999 in anthropology and social studies of medicine from McGill University. His Ph.D. research, under the supervision of Alan Evans, was on in vivo measurements of cortical thickness from magnetic resonance imaging scans.

His current research focus is on detecting neuroanatomical changes due to behavioral and genetic manipulations in mouse models, primarily related to neurodevelopmental disorders, and to relate these findings to human subjects. 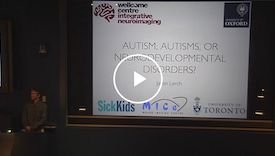 EventAutism, autisms, or neurodevelopmental disorders?January 29, 2020
Subscribe to our newsletter and receive SFARI funding announcements and news
We use cookies to analyze web traffic and to improve your browsing experience; full details are in our privacy policy. Please agree to accept cookies from our site.AGREE