Mark Zylka received his B.S. in biochemistry from Virginia Polytechnic Institute and State University. As an undergraduate, he was named a Barry Goldwater National scholar, and he spent three summers at the National Institutes of Health (NIH) as an Intramural Research Training Award student. He completed his Ph.D. in neurobiology from Harvard University under the mentorship of Steven Reppert. While in graduate school, he identified several of the core circadian clock genes and determined at a mechanistic level how these genes contribute to circadian rhythms in mammals. He then did his postdoctoral work at the California Institute of Technology and co-discovered a large family of G protein–coupled receptors called ‘Mas-related genes’ (Mrgprs) that are exclusively found in sensory neurons of rodents and humans. These receptors are now being studied as therapeutic targets for pain and itch.

After joining the faculty at The University of North Carolina (UNC) at Chapel Hill, Zylka received several prestigious young investigator awards, including a Searle Scholars award, a Sloan Research Fellowship, a Klingenstein fellowship, a Whitehall Foundation award and a Rita Allen fellowship. His laboratory has been continuously funded by the NIH, and he received an NIH Director’s Pioneer Award in 2013.

Zylka was promoted to director of the UNC Neuroscience Center in 2016 and is responsible for hiring new faculty, shaping the direction of the center and promoting neuroscience research campus-wide.

His laboratory is broadly focused on developing novel treatments for chronic pain and autism. Specific projects in the laboratory include use of single-cell sequencing to study the normal and diseased brain, using machine-learning approaches to assess pain in animal models, studying the role of topoisomerase 1 in the nervous system, developing a novel CRISPR/Cas9-based treatment for Angelman syndrome, and studying genetic and environmental risks for autism.

Current
Evaluating molecular changes in the brain of Chd8 mutant mice as a function of age
Awarded: 2018
Award Type: Director 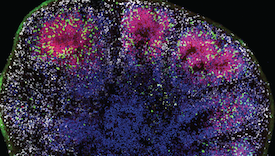 NewsSFARI workshop explores challenges and opportunities of gene therapies for autism spectrum disorderJune 24, 2020
Subscribe to our newsletter and receive SFARI funding announcements and news
We use cookies to analyze web traffic and to improve your browsing experience; full details are in our privacy policy. Please agree to accept cookies from our site.AGREE