Mark Bear is Picower Professor of Neuroscience in the Picower Institute for Learning and Memory, Department of Brain and Cognitive Sciences, Massachusetts Institute of Technology (MIT). Prior to moving to MIT in 2003, Bear was on the faculty of Brown University School of Medicine for 17 years, where he held the Sidney and Dorothy Doctors Fox Chair in Visual Neuroscience. He was an Investigator of the Howard Hughes Medical Institute for 22 years, from 1994 to 2015, and served as director of the Picower Institute from 2007 to 2009.

After receiving his B.S. from Duke University, Bear earned his Ph.D. in neurobiology at Brown. He took postdoctoral training from Wolf Singer at the Max Planck Institute for Brain Research in Frankfurt, Germany, and from Leon Cooper at Brown University. His laboratory has substantially advanced knowledge of how the cerebral cortex is modified by experience. He has made fundamental discoveries on bidirectional synaptic plasticity, metaplasticity, the molecular basis of amblyopia (a cause of visual disability in children) and the pathophysiology of fragile X syndrome (the most common inherited cause of intellectual disability and autism). He has also been at the forefront of the efforts to translate knowledge of autism pathophysiology into new treatments.

Bear has been recognized with a number of honors, including the Society for Neuroscience Young Investigator Award, the National Fragile X Foundation William & Enid Rosen Research Award, the Fragile X Research Foundation (FRAXA) Pioneer Award, the Ipsen Foundation Neural Plasticity Prize, the Beckman-Argyros Award in Vision and election to the American Academy of Arts and Sciences. He is an inventor on eight issued U.S. patents and was scientific founder of two start-up companies. He is lead author of the leading undergraduate neuroscience textbook, Neuroscience: Exploring the Brain, now in its fourth edition. 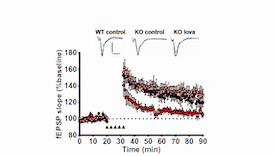 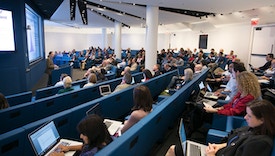 NewsSFARI April 2015 Science Meeting Held at FoundationJune 2, 2015
Subscribe to our newsletter and receive SFARI funding announcements and news
We use cookies to analyze web traffic and to improve your browsing experience; full details are in our privacy policy. Please agree to accept cookies from our site.AGREE