Gerald Crabtree is the David Korn Professor at Stanford University School of Medicine. He has been a Simons Foundation Autism Research Initiative Investigator since 2014 and a Howard Hughes Medical Institute investigator since 1988. His laboratory studies fundamental mechanisms of chromatin regulation and its interface with signal transduction in the development of the human and mammalian nervous system. He is a member of the National Academy of Sciences, a recipient of the Senator Jacob Javits Neuroscience Investigator Award, the Thomas Reuters Laureate as well as many others. His work has been summarized in articles in the New York Times and the Wall Street Journal.

Crabtree’s laboratory discovered that neurons contain a specialized, neuron-specific chromatin regulatory, the nBAF complex, which controls the formation of the epigenetic landscape of neurons and the ability of neurons to make effective connections to build neural circuits. Several subunits of the nBAF complex are among the most commonly mutated genes in sporadic mental retardation, autism and a wide variety of other neurologic diseases characterized by defects in speech formation. The goals of his laboratory are to understand the pathogenesis of these diseases at a molecular level that will allow the development of specific therapies. 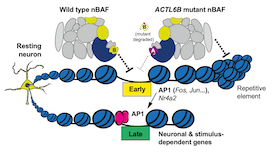