Seth Shipman received his B.A. from Wesleyan University and Ph.D. in neuroscience from the University of California, San Francisco (UCSF). His graduate work was done with Roger Nicoll, using electrophysiology to investigate synapse formation in the hippocampus. Shipman went on to a postdoctoral position with George Church and Jeffrey Macklis at Harvard University, using synthetic biology to build new molecular tools to study neurodevelopment. Shipman opened his own laboratory at the Gladstone Institutes and UCSF in 2018.

A major goal of Shipman’s lab is to understand the development of cell types and circuits in the brain. The lab does this by applying new technologies and the latest approaches from genetics and synthetic biology to answer long-standing questions about the acquisition and expression of cell fate. For instance, the lab uses a novel method that Shipman developed to acquire data in living cells. In this method, called ‘molecular recording,’ information is written into the genome of a living cell by the addition of new DNA (Shipman et al., Science, 2016; Shipman et al., Nature, 2017). These recordings can be used to better understand the molecular timing of developing systems and to create living molecular diagnostics compatible with long-term monitoring of in vivo physiology. Shipman’s team also aims to engineer arbitrary neural circuits from the ground up using human stem cell–derived neurons as the building material. From simple circuits, they hope to discover the fundamental molecular rules that govern connectivity in the brain. 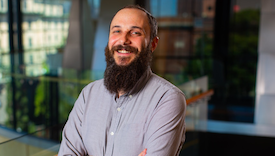 NewsSFARI announces 2017 Bridge to Independence Award finalistsDecember 5, 2017
Subscribe to our newsletter and receive SFARI funding announcements and news
We use cookies to analyze web traffic and to improve your browsing experience; full details are in our privacy policy. Please agree to accept cookies from our site.AGREE