Paul Pavlidis is professor of psychiatry at the University of British Columbia (UBC). He obtained his B.S. from Cornell University and his Ph.D. in molecular and cell biology (neuroscience) at the University of California, Berkeley. He did postdoctoral work at Stanford University (under Daniel Madison) and Columbia University (under Eric Kandel and Steven Siegelbaum) on the molecular basis of synaptic plasticity. While at Columbia, he shifted his focus to computational biology and genomics, working with William Noble as a research scientist. Pavlidis was on the faculty of Columbia’s Department of Biomedical Informatics until moving to UBC.

Pavlidis is an expert in bioinformatics, with a long track record of computational method and tool development in functional genomics. His laboratory’s primary research focus is on understanding the molecular basis of neurodevelopmental and psychiatric disorders. 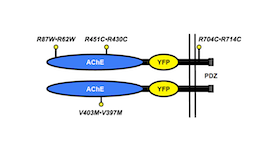 NewsC. elegans screen for ASD risk gene–associated phenotypesMay 11, 2020
Subscribe to our newsletter and receive SFARI funding announcements and news
We use cookies to analyze web traffic and to improve your browsing experience; full details are in our privacy policy. Please agree to accept cookies from our site.AGREE