Caroline Robertson is an assistant professor in the Department of Psychological and Brain Sciences at Dartmouth College, where she leads the Dartmouth Autism Research Initiative. Her research focuses on cognitive neuroscience approaches to memory, perception and neurodiversity.

Robertson received her B.A. from Columbia University in 2009, where she studied neuroscience and philosophy. She received her Ph.D. from the University of Cambridge in 2013, as a Gates-Cambridge Scholar and National Institutes of Health (NIH)-Cambridge Fellow, under the mentorship of Chris Baker (NIH) and Simon Baron-Cohen (Cambridge). She performed her postdoctoral research at the McGovern Institute for Brain Research, Massachusetts Institute of Technology, where she worked with Nancy Kanwisher and held a junior fellowship in the Harvard Society of Fellows.

She was named a fellow of the American Academy of Achievement (2014) and a Kavli Fellow of the National Academy of Sciences (2016). She has also received a National Alliance for Research on Schizophrenia and Depression (NARSAD) Young Investigator Award (2015) from the Brain & Behavior Research Foundation. 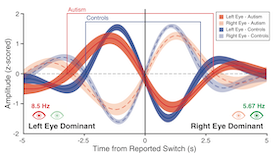 NewsBinocular rivalry: A noninvasive biomarker of inhibitory signaling in the brain?December 12, 2019