Nael Nadif Kasri is head of the Molecular Neurophysiology group at the Radboud University Medical Center and part of the Donders Institute for Brain, Cognition and Behaviour. His group investigates the molecular underpinnings of development and functioning of the nervous system. The group aims to reveal novel neurobiological concepts by resolving the genetic and epigenetic networks that are disrupted in cognitive conditions, including intellectual disabilities (ID), autism spectrum disorder (ASD), epilepsy and other neurodevelopmental conditions.

‘Disease’ genes are used as a starting point to resolve the role of the corresponding proteins in the normal and diseased brain, using a multilevel strategy that combines functional genomics and molecular and cellular neurobiological approaches. This includes the generation and characterization of in vitro (primary neurons from rodents and human induced pluripotent stem cell–derived neural cells) as well as in vivo (mouse) models. By doing so, Kasri has identified the mechanism behind several ID/ASD-linked genes, providing new insight into key hub signaling pathways affected in these disorders as well as mechanisms of synaptic plasticity. Finally, Kasri’s laboratory aims to integrate fundamental neurobiological research with clinical applications and personalized medicine, such as drug screens. His expertise in generating neural lineages from individuals with disorders and performing recordings at single cell and network levels is setting the stage in this novel research field. 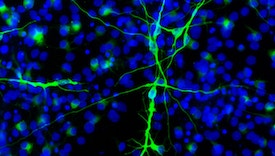 NewsSFARI Winter 2019 Pilot awardees announcedFebruary 22, 2019
Subscribe to our newsletter and receive SFARI funding announcements and news
We use cookies to analyze web traffic and to improve your browsing experience; full details are in our privacy policy. Please agree to accept cookies from our site.AGREE