Fenna Krienen is a postdoctoral fellow at Harvard Medical School. She received her B.A. from the University California, Berkeley and completed her doctoral studies at Harvard University with Randy Buckner, where she used noninvasive neuroimaging to infer principles of corticocortical and corticocerebellar network architecture in the human brain.

She was a fellow at George Washington University’s Center for Advanced Study of Human Paleobiology, where she developed analytic approaches to unify human transcriptomic and connectomic data sets, before going on to join Steve McCarroll’s lab for postdoctoral training in genetics at Harvard Medical School and at the Broad Institute’s Stanley Center for Neuropsychiatric Disease. There, she used single-cell RNA sequencing to uncover cellular and molecular innovations in primate and rodent interneurons. Krienen now plans to apply single cell genomics technologies to understand conservation and divergence in ASD risk gene expression and regulation across species, focusing in particular on the neurodevelopmental consequences of SHANK3 mutations. 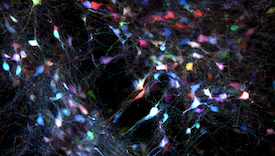