He obtained his B.Sc. in biological sciences with honors in psychology from the University of Edinburgh, and his Ph.D. in neurobiology from Cambridge. Between two periods as a research scientist at the Medical Research Council’s Cognitive Development Unit in London (1985–89 and 1994–98), he was associate professor of cognitive neuroscience at Carnegie Mellon University. In 1997, he moved to Birkbeck, University of London, with funding from the Medical Research Council, and established the Centre for Brain and Cognitive Development. In 2017, he was elected to the chair and headship at Cambridge.

He has published over 360 papers and 10 books on brain and cognitive development in human infants and children and in other species. His laboratory currently focuses on typical, at-risk and atypical functional brain development in human infants and toddlers using a variety of different brain imaging, cognitive, behavioral, genetic and computational modeling techniques. 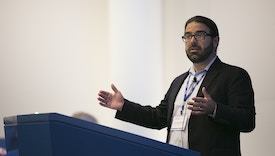 NewsSFARI presentations at INSAR 2018May 3, 2018
Subscribe to our newsletter and receive SFARI funding announcements and news
We use cookies to analyze web traffic and to improve your browsing experience; full details are in our privacy policy. Please agree to accept cookies from our site.AGREE