Marino Pagan is a postdoctoral research associate at Princeton University. He received his B.S. in computer engineering and his M.S. in control engineering from Scuola Superiore Sant’Anna and University of Pisa in Italy. He completed his Ph.D. in neuroscience at University of Pennsylvania in the laboratory of Nicole Rust, where he studied the neural circuits of visual object search in macaque monkeys using electrophysiology and computational modeling.

His postdoctoral research with Carlos Brody at Princeton University has focused on the neural mechanisms underlying cognitive flexibility. To approach this problem, Pagan trains rats to perform complex rule switching tasks, traditionally studied in primates. This allows the use of the powerful techniques available in rodents to record and perturb neural activity during behavior. Using a combination of experimental and computational approaches, Pagan aims to investigate the mechanisms linking neural circuit abnormalities to cognitive dysfunction in genetic rat models of autism spectrum disorder. 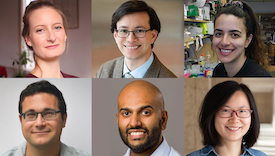