Maria Lehtinen received her Ph.D. in neurobiology from Harvard University, where she trained with Azad Bonni on signaling mechanisms regulating neuronal survival and death. She joined Anna-Elina Lehesjoki’s lab for postdoctoral work at the University of Helsinki, where she investigated the role of redox homeostasis in progressive myoclonus epilepsy. Lehtinen then carried out further postdoctoral training with Christopher A. Walsh at Harvard, where she found that secreted factors in the cerebrospinal fluid (CSF) play active roles in instructing the development and health of the mammalian cerebral cortex.

Lehtinen established her own laboratory at Boston Children’s Hospital in 2012, where she is currently the Hannah C. Kinney, MD, Chair in Pediatric Pathology Research. She is also a New York Stem Cell Foundation – Robertson Stem Cell Investigator. Her lab is focused on basic and translational research related to choroid plexus-CSF-based signaling in the brain, with applications to neurodevelopmental diseases, hydrocephalus and therapeutics.

Past
Amniotic and cerebrospinal fluid-based signaling in a mouse model of autism
Awarded: 2016
Award Type: Pilot 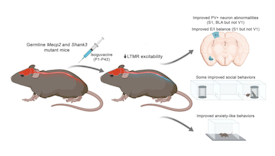