David Sulzer is a professor of psychiatry, neurology and pharmacology at Columbia University Medical Center and the New York Psychiatric Institute. His lab conducts research devoted to understanding the synapses of the basal ganglia, particularly in investigating how synapses of the cortex, striatum and dopamine neurons are selected to underlie learning and decision-making; and elucidating the causes of diseases that produce disorders of the basal ganglia, including Parkinson’s, Huntington’s, drug dependence, autism and schizophrenia.

Sulzer has authored over 170 publications that have been cited over 27,000 times in the field of dopamine and basal ganglia synaptic physiology and disease and has introduced multiple new therapeutic directions. His awards include the McKnight, the NARSAD Distinguished Investigator Award and plenary talks for many international conferences. He founded the Gordon Conference on Parkinson’s disease and the new journal Nature NPG Parkinson’s Disease. 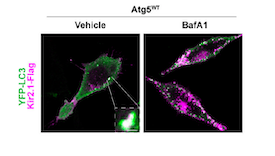 NewsSFARI 2015 Pilot and Research awardees announcedDecember 4, 2015
Subscribe to our newsletter and receive SFARI funding announcements and news
We use cookies to analyze web traffic and to improve your browsing experience; full details are in our privacy policy. Please agree to accept cookies from our site.AGREE