His research interests center on a variety of problems in developmental cognitive neuroscience, including: typical and atypical memory development; the development of social perception; developmental trajectories to autism; and the effects of early adversity on brain and behavioral development.

He chaired the John D. and Catherine T. MacArthur Foundation Research Network on Early Experience and Brain Development and served on the National Academy of Sciences (NAS) panels that wrote From Neurons to Neighborhoods and, more recently, New Directions in Child Abuse and Neglect Research. Among his many honors, he has received the Leon Eisenberg award from Harvard Medical School, the T. Berry Brazelton Innovation award from Boston Children’s Hospital, an honorary doctorate from Bucharest University (Romania), the Brain & Behavior Research Foundation Ruane Prize in Child Psychiatry; was a resident fellow at the Rockefeller Foundation Bellagio Center (Italy); and has been elected to the American Academy of Arts and Sciences.

Past
Characterization of infants and toddlers with the 16p copy-number variation
Awarded: 2011
Award Type: Research 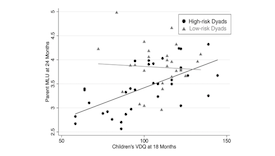 NewsParental influence on language development in infants at high and low risk for autismFebruary 5, 2021

NewsSFARI abstracts and e-Posters at INSAR 2020 VirtualJuly 2, 2020
Subscribe to our newsletter and receive SFARI funding announcements and news
We use cookies to analyze web traffic and to improve your browsing experience; full details are in our privacy policy. Please agree to accept cookies from our site.AGREE