Beate St Pourcain is a group leader (senior investigator) and W2 professor at the Max Planck Institute for Psycholinguistics, Nijmegen, the Netherlands. She obtained a degree and M.S. in psychology and a degree and M.S. in biology at the Georg-Augusta-Universität, Göttingen, Germany. Following a year as a psychologist at the Children’s Clinic, Dahn, Germany, she completed a Ph.D. at Cardiff University, UK, in 2005 and an M.S. in genetic epidemiology and bioinformatics in 2005, also at Cardiff University. St Pourcain held postdoctoral positions at Cardiff University and later the University of Bristol, where she joined the faculty in 2012.

The St Pourcain laboratory at the Max Planck Institute for Psycholinguistics, Nijmegen, opened in 2015 and focuses on population genetic analyses of language and communication in typically developing children. One area of basic investigation has been the multivariate study of genetic variance, where her group developed and implemented structural equation modelling approaches to investigate changes in the genetic architecture of complex phenotypes, studying unrelated individuals. Other research areas include the study of genetic overlap between language, communication and psychiatric disorders (in particular autism) and developmental changes in these genetic links. She is involved in many scientific consortia, leading large-scale genetic analyses of early language development, social abilities and head circumference. 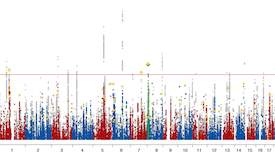 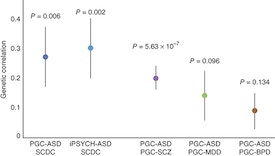 NewsAutism risk variants impact a continuum of social and behavioral traits within the general populationMarch 31, 2016
Subscribe to our newsletter and receive SFARI funding announcements and news
We use cookies to analyze web traffic and to improve your browsing experience; full details are in our privacy policy. Please agree to accept cookies from our site.AGREE