The main focus of Helen Tager-Flusberg’s research for more than four decades has been on defining the neurocognitive and developmental bases of the language, communication and associated social-cognitive deficits in autism spectrum disorder (ASD) and other neurodevelopmental disorders (including developmental language disorder [DLD], reading impairment, Williams syndrome, Down syndrome and Prader-Willi syndrome).

Tager-Flusberg has explored the role of broader influences of IQ, executive functions and especially language on development in these populations, as well as in typically developing children. Over the past decade, she has explored language impairments within subtypes of ASD and across the full spectrum of language ability, and in comparison to other populations including DLD and reading impairment.

Her laboratory uses behavioral/cognitive methods, structural imaging (magnetic resonance imaging [MRI] and diffusion tensor imaging) methods, functional imaging (functional MRI [fMRI] and functional near-infrared spectroscopy [fNIRS]) and electrophysiological methods (event-related potentials and electroencephalography) in individuals with ASD and their first-degree relatives. More recently, her group has begun to translate some of their research findings into explorations of the influence of targeted interventions and into the development of novel treatments and outcome measures.

Over the past two decades, Tager-Flusberg has been the principal investigator on a number of major National Institutes of Health–funded multidisciplinary research programs on ASD, including two Collaborative Programs of Excellence in Autism (CPEAs), a Studies to Advance Autism Research & Treatment (STAART) center and an Autism Center of Excellence (ACE) at Boston University. 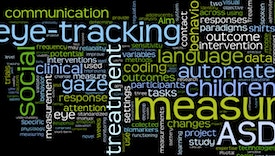 NewsSFARI announces Novel Outcome Measures for ASD Clinical Trials awardeesJanuary 29, 2016
Subscribe to our newsletter and receive SFARI funding announcements and news
We use cookies to analyze web traffic and to improve your browsing experience; full details are in our privacy policy. Please agree to accept cookies from our site.AGREE