Stephen Traynelis is a professor of pharmacology and chemical biology, director of the Center for Functional Evaluation of Rare Variants, and a Dean’s Eminent Investigator at the Emory University School of Medicine. He received a B.S. from West Virginia University in chemistry and a Ph.D. in pharmacology from the University of North Carolina. He completed postdoctoral fellowships at the University College London and the Salk Institute.

His research interests include synaptic transmission, the glutamate receptor family, the biophysical basis for ion channel gating, allosteric modulation of ion channels, the contribution of genetic variation to neurodevelopmental and neurological disorders, and translational efforts to conceptualize new treatments for epilepsy, Alzheimer’s disease, Parkinson’s disease, movement disorders, psychiatric disorders, and acute neuronal injury and neuroinflammation in the context of injury and neurodegenerative disease.

Traynelis is a fellow of the American Association for the Advancement of Science (AAAS), and the American Society for Pharmacology and Experimental Therapeutics (ASPET), former editor-in-chief of Molecular Pharmacology, recipient of a National Institutes of Health Javits Award and R35 Research Program Award, and co-author on more than 250 peer-reviewed papers, chapters and commentaries. He is also a co-inventor on seven awarded U.S. patents and a co-founder of multiple startup companies. 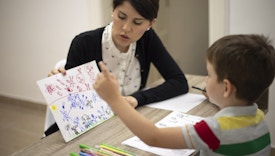 NewsSFARI 2021 Director Awards announcedJanuary 27, 2022
Subscribe to our newsletter and receive SFARI funding announcements and news
We use cookies to analyze web traffic and to improve your browsing experience; full details are in our privacy policy. Please agree to accept cookies from our site.AGREE